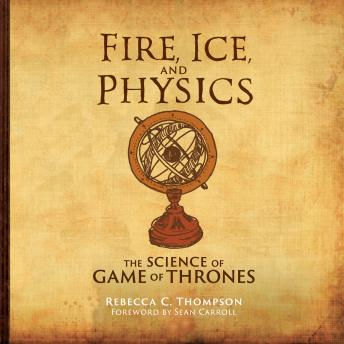 Fire, Ice, and Physics: The Science of Game of Thrones

Exploring the science in George R. R. Martin's fantastical world, from the physics of an ice wall to the genetics of the Targaryens and Lannisters.

Game of Thrones is a fantasy that features a lot of made-up science--fabricated climatology (when is winter coming?), astronomy, metallurgy, chemistry, and biology. Most fans of George R. R. Martin's fantastical world accept it all as part of the magic. A trained scientist, watching the fake science in Game of Thrones, might think, 'But how would it work?'

In Fire, Ice, and Physics, Rebecca Thompson turns a scientist's eye on Game of Thrones, exploring, among other things, the science of an ice wall, the genetics of the Targaryen and Lannister families, and the biology of beheading. Thompson, a PhD in physics and an enthusiastic Game of Thrones fan, uses the fantasy science of the show as a gateway to some interesting real science, introducing GOT fandom to a new dimension of appreciation.

Thompson starts at the beginning, with winter, explaining seasons and the very elliptical orbit of the Earth that might cause winter to come (or not come). She tells us that ice can behave like ketchup, compares regular steel to Valyrian steel, explains that dragons are 'bats, but with fire,' and considers Targaryen inbreeding. Finally she offers scientific explanations of the various types of fatal justice meted out, including beheading, hanging, poisoning (reporting that the effects of 'the Strangler,' administered to Joffrey at the Purple Wedding, resemble the effects of strychnine), skull crushing, and burning at the stake.

Even the most faithful Game of Thrones fans will learn new and interesting things about the show from Thompson's entertaining and engaging account. Fire, Ice, and Physics is an essential companion for all future bingeing.

This audiobook includes a bonus PDF of charts, figures, and illustrations.

Fire, Ice, and Physics: The Science of Game of Thrones