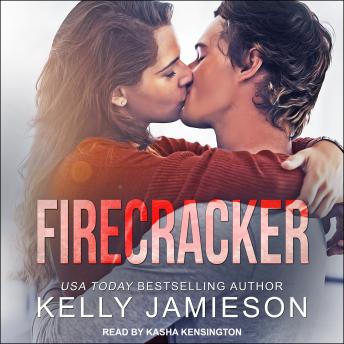 Arden Lennox's charmed life may be in pieces, but she'd sooner get her hoohaw bleached than move back in with her parents. She's no longer the prom-queen princess married to the football star. She's a broke, penniless widow, and it's time she stood on her own two feet.

An under-construction unit in a quaint Chicago brownstone is cheap (free), but it comes with an unexpected surprise. Tyler Ramirez, her brother's gawky high school best friend, is now a smoking hot firefighter who spends most of his spare time in her unit hammering, drilling, and screwing. Usually with his shirt off-a temptation she has no intention of indulging.

Tyler can't believe his high school crush is living right across the hall, or how fast his fierce lust for her comes blazing back. She's still gorgeous-a little sadder, a little quieter, but still with the amazing smile and sweet body that fueled his awkward teenage fantasies.

Despite her best intentions, Arden can't resist grown up Tyler but the sparks between them send her into full retreat. And by the time she realizes the heat between them could last a lifetime, it could be too late to tell him . . .

Firecracker is a good combination of sexy and witty as I've come to expect from Kelly Jamieson. We also have some angst, both in the relationship and for Tyler and Arden individually. They're both carrying around some guilt that they need to deal with and justified or not, that guilt has left them a little bit broken. Guilt aside, this couple has off the charts chemistry, and it's not long into the story before I found myself already rooting for Tyler to win Arden over into a full-blown relationship. We also get some terrific secondary characters, and while this may be a standalone, I'm really hoping to see more of this group of characters in future books. The only drawback for me was the last bit of angst between Arden and Tyler. I won't go into details so I don't spoil it for anyone, but I felt like that last bit of drama was unnecessary. Did that ruin the story for me? Not at all, I still completely enjoyed the story and look forward to whatever comes next from Kelly Jamieson. I read this book when it released and loved the characters, which is par for the course when it comes to Kelly Jamieson's books. So, I was thrilled to get to give the audio version a listen. My feelings about the story are the same. I still love these characters, and not just Tyler and Arden. This one has a truly lovable group of characters, and they all contribute to the progression of the story. Kasha Kensington does the narration, and her voice and performance suits Arden and this story wonderfully. To sum it up, Firecracker was already a great story, and it's been paired with an equally great narrator for a solid listening experience.

I loved this story and I loved getting to know the characters. Arden and Tyler are both complex and have changed and grown from their high school days. The attraction between them is sizzling and explosive but the relationship is so much more than that. The story also involves their friends and the support you don't necessarily realize you need from friends sometimes. It was a nice change to see others supporting them in their journeys. I would have loved to have a dual narration but the narrator here did a great job of bringing the characters to life.

Slow burn gives way to unforgettable. Firecracker sneaks up on emotions, playing peekaboo with the heart. Jamieson takes a different approach this time around. Arden and Tyler missed their chance the first time. Can each let go of the heartaches of their past and take a chance on finding a happy ending together? Stroll through a new beginning that will steal away with your heart.