Firestorm: Allied Airpower and the Destruction of Dresden 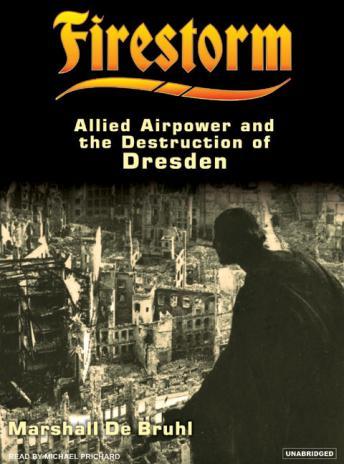 On February 13 and 14, 1945, three successive waves of British and U.S. aircraft rained down thousands of tons of high explosive and incendiary bombs on the largely undefended German city of Dresden. Night and day, Dresden was engulfed in a vast sea of flame, a firestorm that generated 1,500-degree temperatures and hurricane-force winds. Thousands suffocated in underground shelters where they had fled to escape the inferno above. The fierce winds pulled thousands more into the center of the firestorm, where they were incinerated. By the time the fires burned themselves out, many days later, a great city-known as 'the Florence on the Elbe'-lay in ruins, and tens of thousands, almost all of them civilians, lay dead.

In Firestorm, Marshall De Bruhl re-creates the drama and horror of the Dresden bombing and offers the most cogent appraisal yet of the tactics, weapons, strategy, and rationale for the controversial attack. Using new research and contemporary reports, as well as eyewitness stories of the devastation, De Bruhl directly addresses many long-unresolved questions relating to the bombing: Why did the strike occur when the Allies' victory was seemingly so imminent? Was choosing a city choked with German refugees a punitive decision, intended to humiliate a nation? What, if any, strategic importance did Dresden have? How much did the desire to send a 'message'-to Imperial Japan or the advancing Soviet armies-factor into the decision to firebomb the city?

Beyond De Bruhl's analysis of the moral implications and historical ramifications of the attack, he examines how Nazi and Allied philosophies of airpower evolved prior to Dresden, particularly the shift toward 'morale bombing' and the targeting of population centers as a strategic objective. He also profiles the architects and prime movers of strategic bombing and aerial warfare, among them aviation pioneer Billy Mitchell, RAF air marshal Sir Arthur 'Bomber' Harris, and the American commander, General Carl Spaatz.

The passage of time has done nothing to quell the controversy stirred up by the Dresden raid. It has spawned a plethora of books, documentaries, articles, and works of fiction. Firestorm dispels the myths, refutes the arguments, and offers a dispassionate and clear-eyed look at the decisions made and the actions taken throughout the bombing campaign against the cities of the Third Reich-a campaign whose most devastating consequence was the Dresden raid. It is an objective work of history that dares to consider the calculus of war.

Firestorm: Allied Airpower and the Destruction of Dresden