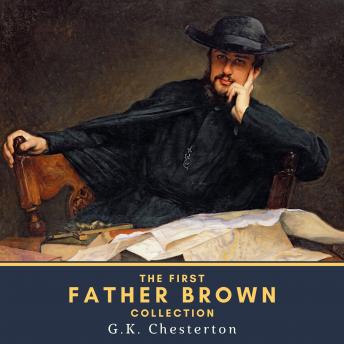 The First Father Brown Collection includes two collections of short stories featuring Father Brown.
Father Brown is a fictional Roman Catholic priest and amateur detective who is featured in 53 short stories published between 1910 and 1936 written by English novelist G.K. Chesterton. Father Brown solves mysteries and crimes using his intuition and keen understanding of human nature. Chesterton loosely based him on the Rt Rev. Msgr. John O'Connor (1870-1952), a parish priest in Bradford, who was involved in Chesterton's conversion to Catholicism in 1922.
Included in this collection:
1. The Innocence of Father Brown (1911): The Blue Cross / The Secret Garden / The Queer Feet / The Flying Stars / The Invisible Man / The Honour of Israel Gow / The Wrong Shape / The Sins of Prince Saradine / The Hammer of God / The Eye of Apollo / The Sign of the Broken Sword / The Three Tools of Death
3. The Wisdom of Father Brown (1914): The Absence of Mr Glass / The Paradise of Thieves / The Duel of Dr Hirsch / The Man in the Passage / The Mistake of the Machine / The Head of Caesar / The Purple Wig / The Perishing of the Pendragons / The God of the Gongs / The Salad of Colonel Cray / The Strange Crime of John Boulnois / The Fairy Tale of Father Brown