The First Human: The Race to Discover Our Earliest Ancestors 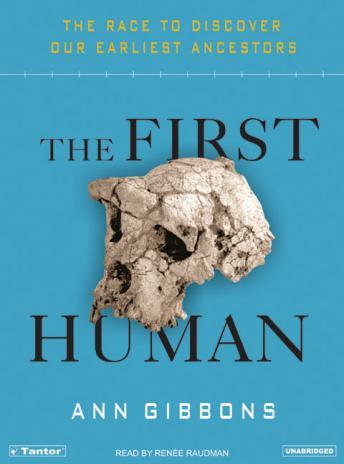 This dynamic chronicle of the race to find the 'missing links' between humans and apes transports readers into the highly competitive world of fossil hunting and into the lives of the ambitious scientists intent on pinpointing the dawn of humankind.

The quest to find where and when the earliest human ancestors first appeared is one of the most exciting and challenging of all scientific pursuits. The First Human is the story of four international teams obsessed with solving the mystery of human evolution and of the intense rivalries that propel them.

An award-winning science writer, Ann Gibbons introduces the various maverick fossil hunters and describes their most significant discoveries in Africa. There is Tim White, the irreverent and brilliant Californian whose team discovered the partial skeleton of a primate that lived more than 4.4 million years ago in Ethiopia. If White can prove that it was hominid-an ancestor of humans and not of chimpanzees or other great apes-he can lay claim to discovering the oldest known member of the human family. As White painstakingly prepares the bones, the French paleontologist Michel Brunet comes forth with another, even more startling find. Well known for his work in the most remote and hostile locations, Brunet and his team uncover a stunning skull in Chad that could set the date of the beginnings of humankind to almost seven million years ago. Two other groups-one led by the zoologist Meave Leakey, the other by the British geologist Martin Pickford and his partner, Brigitte Senut, a French paleontologist-enter the race with landmark discoveries of other fossils vying for the status of the first human ancestor.

Through scrupulous research and vivid first-person reporting, The First Human takes readers behind the scenes to reveal the intense challenges of fossil hunting on a grand competitive scale.

First Human: The Race to Discover Our Earliest Ancestors