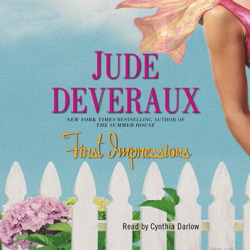 A contemporary novel of romance and renewal from perennial bestseller Jude Deveraux, First Impressions is an emotionally charged story of one woman's bid to start over.

Eden Palmer knows how to make it on her own. The forty-something single mother has worked hard to raise her beloved daughter—now twenty-seven and recently married. The offspring of a terrible event, Eden's daughter, Melissa, has long been the jewel of Eden's life, the one for whom she would sacrifice anything and everything. But sooner or later a woman must come into her own, and that's what Eden tries to do when she moves to Arundel, North Carolina, to take ownership of Farrington Manor, a beautiful old house filled with charm and memories that was willed to Eden by the person who cared for her when she needed it most. Torn between the desire to stay with her daughter and the need to build a separate life on her own, Eden opts for some distance and some much-needed perspective. But it's not long before she realizes that sometimes you have to go back before you can start over.

Arriving in Arundel—the South's prettiest small town—Eden quickly learns that looks can be deceiving when her move is met with delight in some quarters and jealousy in others. Pursued by two eligible bachelors—the rugged Jared McBride and Braddon Granville, local lawyer and town catch—Eden is flattered, and more than a little suspicious. Juggling the attentions of two men is hard enough, but soon Eden's bid to start over plunges her in the middle of a mystery that threatens not just her plans and reputation, but her very life. Can she use one man to save her from the other?