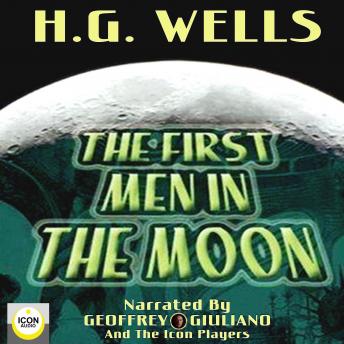 The First Men in The Moon

Britain won the Moon Race! Decades before Neal Armstrong took his 'giant leap for mankind' two intrepid adventurers from Lympne, England, journeyed there using not a rocket, but an antigravity coating. Mr. Bedford, who narrates the tale, tells of how he fell in with eccentric inventor Mr. Cavor, grew to believe in his researches, helped him build a sphere for traveling in space, and then partnered with him in an expedition to the Moon. What they found was fantastic! There was not only air and water, but the Moon was honeycombed with caverns and tunnels in which lived an advanced civilization of insect-like beings. While Bedford is frightened by them and bolts home, Cavor stays and is treated with great respect. So why didn't Armstrong and later astronauts find the evidence of all this? Well, according to broadcasts by Cavor over the newly-discovered radio technology, he told the Selenites too much about mankind, and apparently, they removed the welcome mat!
Produced by Devin Lawrence
Edited by Macc Kay
Production executive Avalon Giuliano
ICON Intern Eden Giuliano
Music By AudioNautix With Their Kind Permission
©2020 Eden Garret Giuliano (P) Eden Garret Giuliano
Geoffrey Giuliano is the author of over thirty internationally bestselling biographies, including the London Sunday Times bestseller Blackbird: The Life and Times of Paul McCartney and Dark Horse: The Private Life of George Harrison. He can be heard on the Westwood One Radio Network and has written and produced over seven hundred original spoken-word albums and video documentaries on various aspects of popular culture. He is also a well known movie actor.