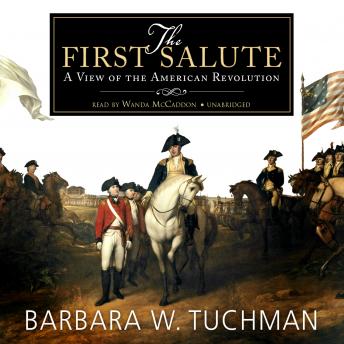 Two-time winner of the Pulitzer Prize, distinguished historian, and bestselling author Barbara W. Tuchman finally turns her sights homeward. Here she analyzes the American Revolution in a brilliantly original way, placing the war in the historical context of the centuries-long conflicts between England and both France and Holland, demonstrating how the aid of both of these nations made the triumph of American independence possible. She sheds new light on the key role played by the contending navies, paints a magnificent portrait of General George Washington, and recounts in riveting detail the decisive campaign of the war at Yorktown. A compellingly written work of history, The First Salute presents a fresh, new view of the events that led from the first foreign salute to American nationhood in 1776 to the last campaign of the Revolution five years later. It brings vividly to life the people and events responsible for the birth of our nation.

It’s Barbara Tuchman. That alone would be enough, but it’s also, yet again, a wonderful history. You’d think she’d have gotten bored being perfect.