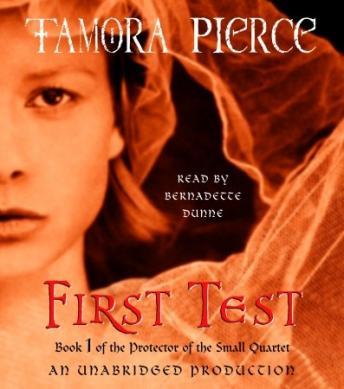 First Test: Book 1 of the Protector of the Small Quartet

Kel will not allow this first test to be her last. Her adventure begins in the New York Times bestselling series from the fantasy author who is a legend herself: TAMORA PIERCE.

Keladry of Mindelan is the first girl who dares to take advantage of a new rule in Tortall—one that allows females to train for knighthood. After years in the Yamani Islands, she knows that women can be warriors, and now that she’s returned home, Kel is determined to achieve her goal. She believes she is ready for the traditional hazing and grueling schedule of a page. But standing in Kel’s way is Lord Wyldon. The training master is dead set against girls becoming knights. He says she must pass a one-year trial that no male page has ever had to endure. It’s just one more way to separate Kel from her fellow trainees. But she is not to be underestimated. She will fight to succeed, even when the test is unfair.

More timely than ever, the Protector of the Small series is Anti-Bullying 101 while also touching on issues of bravery, friendship, and dealing humanely with refugees against a backdrop of an action-packed fantasy adventure.

'Tamora Pierce's books shaped me not only as a young writer but also as a young woman. She is a pillar, an icon, and an inspiration. Cracking open one of her marvelous novels always feels like coming home.'
—SARAH J. MAAS, #1 New York Times bestselling author

First Test: Book 1 of the Protector of the Small Quartet

This title is due for release on November 13, 2007
We'll send you an email as soon as it is available!