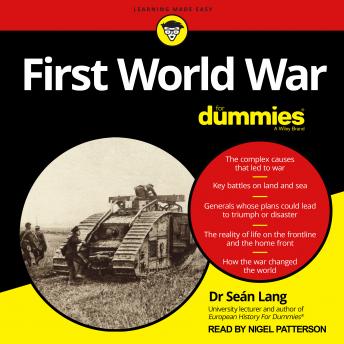 From the Somme to Gallipoli to the home front, First World War For Dummies provides an authoritative, accessible, and engaging introduction to the War to End All Wars. It takes a global perspective of this global conflict, proving insight into the actions and motivations of the participants and how each nation's story fits into the wider one.

Coverage also includes: the origins of the war and a snapshot of what the world looked like at the beginning of the 20th century; the battles of Western Europe, and action in the Southern and Eastern Fronts; the war at home-the civilian war, propaganda, opposition, politics, protests, and more; 1918: The German spring offensive, the Allied success, and the beginning of the end; and the Treaty of Versailles, the League of Nations, and the effect on the future.

First World War For Dummies is the go-to source for listeners seeking to learn more about the fundamental event of the 20th century.