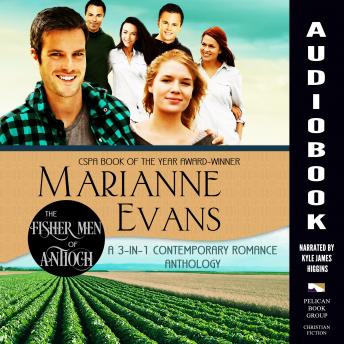 Contains all three books in the Fisher Men of Antioch trilogy. . . THE RETURN: SOMETIMES THE HARDEST PATH TO WALK IS THE ONE THAT LEADS YOU HOME After college, Phillip Fisher shook the dust of Antioch, Indiana from his dress shoes and took off for Indianapolis. For the eldest of the three Fisher men, a business career promised stability and a fruitful future...until unemployment and exhausted resources force him back home. He returns to Antioch to find his father's declining health, a family farm in disrepair, and heavy doses of resentment from his brother Aaron. A repentant Phillip pays regular visits to Sundae Afternoon, the sweets and sundry shop run by Mila Thomas. Sundae Afternoon and the Thomas Grocery Market are staples of Antioch, just like the Fisher farm. A less than steady peace exists between the families, but Phillip always intrigued Mila. She admires his attempts to break free; at the same time, his return speaks of a noble, caring man. But what happens once the farm is restored? What happens when Phillip is called back to Indianapolis? Mila's roots are firmly grounded, and Phillip might leave all over again. Is returning home and the discovery of an extraordinary love, enough to bring them together forever?

THE STRONGHOLD: SOMETIMES EVEN THE STRONG ONE NEEDS SOMETHING TO HOLD ONTO Aaron Fisher is the middle-born Fisher man, but through necessity, he's embraced the role of family leader. He's always been the stronghold, the standard bearer. Aaron conforms. He fulfills and most often exceeds expectations. He's stoic and strongâ€”the sheep that stayed on course with the Savior. Seen as the one most likely to marry a known and well-suited woman from town, Aaron intends to continue the traditions of faith, farming and family left behind in the footsteps of those who preceded him. Until he meets Emma Briggs. A gifted RN, Emma enters Aaron's life when his father experiences health issues. She's a newbie to Antioch's medical facility who calms the family's storm, but Emma harbors a secret, an undeserved shame she's disclosed to no one in this tight-knit, rural town. Emma is a mysteryâ€”the new and unknown quantity of Antioch. Aaron is part of its foundation and pulse. Can Emma's past be reconciled to the present? Can she find acceptance in a new placeâ€”a new seasonâ€”with the love of a lifetime?

THE JOURNEY: SOMETIMES YOU HAVE TO RISK LOVE AND LEGACY TO ANSWER GOD'S CALL Benjamin Fisher melds with quiet perfection into the tapestry of the Fisher family. The youngest of the three Fisher men, Ben is gifted with skills that keep machines running, crops efficiently harvested, farm structures sound and secure. But there's one person in the small village of Antioch, Indiana who has noticed and adored the man since her youth. Hailey Beth Thomas. Hailey Beth's sister is marrying Ben's brother in a spring wedding that promises to be the event of the season. Thrown together as the heady romance of an upcoming marriage takes place, love and revelation come to life. Unknown to anyone else, Ben wants to answer a call to the mission fields of North America that will lead him far from the life he has always known. Ben longs to serve, but he wants a life with Hailey Beth as well. Hailey Beth can't leave Antioch, but can't bear the idea of losing Ben. Are they meant to be together, or will God's call pull them apart just as they've found a way to one another?

This title is due for release on June 26, 2020
We'll send you an email as soon as it is available!