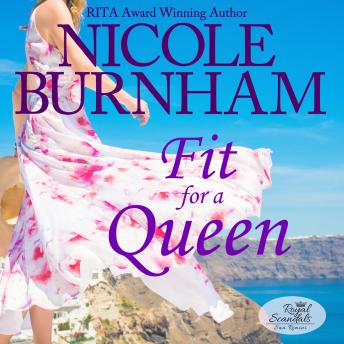 Fit For a Queen

She holds the secrets of a queen. He’s been hired to watch her.

Daniela D’Ambrosio is the most trusted employee of Sarcaccia’s Queen Fabrizia, managing the queen’s schedule and ensuring she never makes a misstep in public. But when Fabrizia sends Daniela to organize the belongings of San Rimini’s late queen for a charity auction, Daniela finds a locked closet full of treasure, a suspicious king, and an attractive handyman who seems strangely familiar.

Following a harrowing stint in the military, Royce Dekker now runs his own security firm in San Rimini. When he goes undercover to safeguard the late queen’s possessions, Royce learns that the woman organizing the auction project is none other than Daniela D’Ambrosio, the stunning beauty who’s fueled his late-night fantasies ever since their stolen night under the stars.

When Daniela recognizes Royce, she realizes there is more to the palace job than she was told. But can she trust the sexy man standing guard over her as she works? Or will Royce discover that Daniela also has secrets to uncover?

Fit For a Queen