The Five Essentials of Success: An Official Publication of the Napoleon Hill Foundation 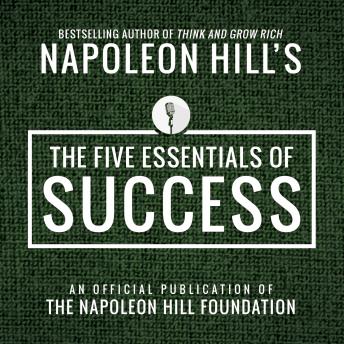 This title is also included in Napoleon Hill's Greatest Speeches, which is also available as an audiobook.

When Napoleon Hill was asked to deliver the baccalaureate sermon on June 2, 1957, at Salem College, it had been thirty-five years since he had delivered a commencement address to the 1922 graduating class at the same college.

He was introduced as the man who developed the “science of success.” This science was an exact study which laid down the principles by which anyone could realize his or her material goals no matter what ambitions they may be.

In this famous speech, Hill boils the study down to five essentials by which any man, woman, boy, or girl could follow to live a successful life.

Five Essentials of Success: An Official Publication of the Napoleon Hill Foundation

This title is due for release on October 24, 2016
We'll send you an email as soon as it is available!