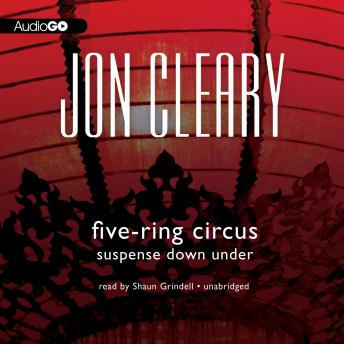 Five-Ring Circus: Suspense Down Under

It's a special occasion Down Under and the notoriously frugal Inspector Malone is taking his family to dinner at one of Sydney's finest Chinese restaurants. But their gala turns grisly when a masked assassin enters and guns down three men at a nearby table.
The ante goes up when Scobie discovers that one victim was an investor in Olympic Tower, a multimillion dollar luxury project in downtown Sydney, originally intended as posh housing for the VIPs during the 2000 Olympic Games. With construction stalled by union strife and an economic slump, the Olympic Tower is still an empty shell-or is it a deadly shell game?
Scobie must solve a scam that could sour the city's image. It seems everyone is involved from former Chinese government bigwigs to a city councilman on the take and from humble Chinese students with seven figure bank accounts to the mysterious Madame Tzu, a dragon lady if there ever was one.
As Scobie and his family are drawn into the circle of danger, he finds himself in an arena where sportsmanship is the last thing on anybody's mind.

Five-Ring Circus: Suspense Down Under