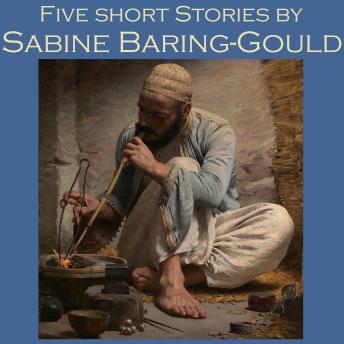 Sabine Baring-Gould (1834-1924) was a British writer, clergyman and member of the landed gentry, having inherited an estate of 3,000 acres. While a young curate, he met and fell in love with a beautiful 16-year-old mill worker. He paid for her education and married her, and they subsequently had 15 children. Their relationship formed the inspiration for George Bernard Shaw's play Pygmalion, which was turned into the musical My Fair Lady. Baring-Gould's strangest and most enduring works are those which are based on fantastical medieval myths and folklore.

'A Dead Finger' is a strange vampire story about a parasitic dead human finger which feeds off living humans in an attempt to draw the life force out of them and thus regrow its body.

'The Red-Haired Girl' is a ghost story about an eerie and ominous servant girl who stalks the house, watching its inhabitants malevolently.

'The 9.30 Up Train' is a peculiar ghost story about a strange ghost which haunts both the road near the railway station and also a particular carriage of the train itself.

'The Leaden Finger' is the tale of a young woman persistently and cruelly haunted by the sinister ghost of a previous admirer who committed suicide when she refused his marriage proposal.

"Mustapha" is the strange story of a young Egyptian who takes a solemn vow to avoid alcohol, in order to win his beloved's hand in marriage. A British tourist finds it amusing to try to trick the locals into breaking their religious vows. When he fools Mustapha and gets him unwittingly to take a sip of brandy, Mustapha commits suicide. His ghost returns to exact a terrible revenge.