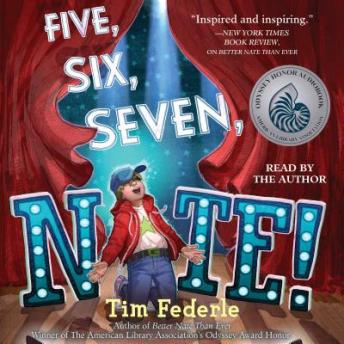 “The Nate series by Tim Federle is a wonderful evocation of what it’s like to be a theater kid. Highly recommended.” —Lin-Manuel Miranda, star and creator of the musical, Hamilton

Winner of the Lambda Literary Award

Encore! Nate Foster’s Broadway dreams are finally coming true in this sequel to Better Nate Than Ever that Publishers Weekly calls a “funny, tender coming-of-age story.”

Armed with a one-way ticket to New York City, small-town theater geek Nate is off to start rehearsals for E.T.: The Broadway Musical. It’s everything he ever practiced his autograph for! But as thrilling as Broadway is, rehearsals are nothing like Nate expects: full of intimidating child stars, cut-throat understudies, and a director who can’t even remember Nate’s name.

Now, as the countdown to opening night is starting to feel more like a time bomb, Nate is going to need more than his lucky rabbit’s foot if he ever wants to see his name in lights. He may even need a showbiz miracle.

The companion novel to Better Nate Than Ever, which The New York Times called “inspired and inspiring,” Five, Six, Seven, Nate! is full of secret admirers, surprise reunions, and twice the drama of middle school...with a lot more glitter.