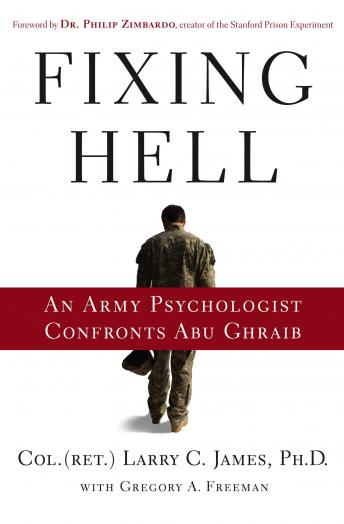 This is the story of Abu Ghraib that you haven't heard, told by the soldier sent by the Army to restore order and ensure that the abuses that took place there never happen again.

In April 2004, the world was shocked by the brutal pictures of beatings, dog attacks, sex acts, and the torture of prisoners held at Abu Ghraib in Iraq. As the story broke, and the world began to learn about the extent of the horrors that occurred there, the U.S. Army dispatched Colonel Larry James to Abu Ghraib with an overwhelming assignment: to dissect this catastrophe, fix it, and prevent it from being repeated.

A veteran of deployments to Guantanamo Bay, Cuba, and a nationally well-known and respected Army psychologist, Colonel James's expertise made him the one individual capable of taking on this enormous task. Through Colonel James's own experience on the ground, readers will see the tightrope military personnel must walk while fighting in the still new battlefield of the war on terror, the challenge of serving as both a doctor/healer and combatant soldier, and what can-and must-be done to ensure that interrogations are safe, moral, and effective.

At the same time, Colonel James also debunks many of the false stories and media myths surrounding the actions of American soldiers at both Abu Ghraib and Guantanamo Bay, and he reveals shining examples of our men and women in uniform striving to serve with honor and integrity in the face of extreme hardship and danger.

An intense and insightful personal narrative, Fixing Hell shows us an essential perspective on Abu Ghraib that we've never seen before.

This title is due for release on September 18, 2008
We'll send you an email as soon as it is available!