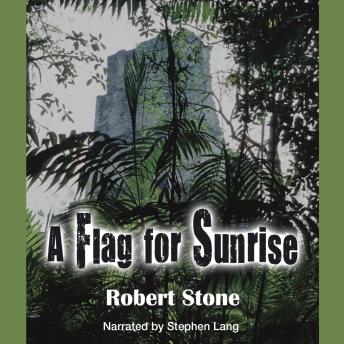 A Flag for Sunrise

Written By: Robert B. Stone

A Flag for Sunrise is a novel of Americans drawn into the maelstrom of Tecan, a small Central American country on the brink of revolution. At a mission on the coast a priest is lapsing into alcoholic mysticism, while a young American nun is veering towards commitment to the cause. In a bar in Brooklyn, Frank Holliwell is lunching with an old CIA friend who is begging for a favor. On the Tex–Mex border, Pablo, a Coast Guard deserter, loco on speed, is about to take a job carrying mysterious contraband to Tecan. As these lives converge, as this small, crowded world erupts, the novel builds to an electrifying climax.

“Stone, who has a strong imaginative grip on the contemporary American scene and writes like an angel—a fallen, hard driving angel—is also a marvelous storyteller.”--New York Review of Books

by Robert B. Stone