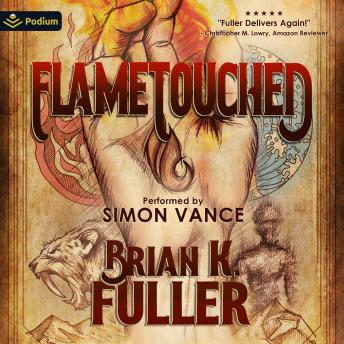 The Eternal Flame branded its mark upon Davon Carver's palms, and now the sabercat he carved has come to life. Creating living carvings is an odd and troublesome gift for a humble clerk trying to uncover a plot against his beloved nation, Bittermarch. But like the hidden conspirators he's trying to expose, Davon guards a secret — he wasn't always a clerk. Once a nobleman and a Baron, Davon faked his own death to escape his cruel marriage.

Davon wants a quiet life, but the Queen orders her new clerk to delve into the affairs of the lovely Lady Hightower to uncover the truth about the mysterious plot. He discovers that powerful and prestigious conspirators don't like meddlesome clerks, and Davon must dodge bullets and increasing scrutiny, fearing the exposure of his past life. As the clues fall into place, Davon finds that the fate of Bittermarch and the Eternal Flame itself are in his flame-branded hands.