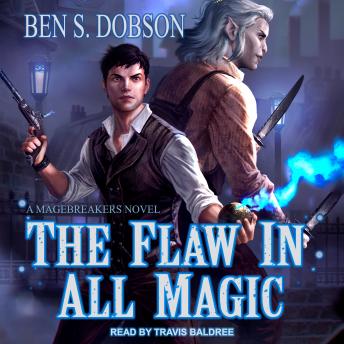 The Flaw in All Magic

In a world of elves and dwarves and sprites and mages, Tane Carver is a human with no gift but his wits. Which, to be fair, did get him into the world's most prestigious university of magical technology.

Until his lack of magic was discovered. And then it all came crashing down.

But when a student is murdered on campus behind unbreakable wards, Tane gets a second chance. Solving an impossible crime should be easy for the man who fooled the university's best mages for years. Except he's not counting on the head constable being an old flame who isn't so fond of him anymore. Or on Kadka, the half-crazy half-orc who insists she's his partner-whether he likes it or not.

Not to mention the masked mage who keeps trying to kill him.

Now, Tane's survival depends on the one truth that has never failed him. The flaw in all magic that those who have it prefer to ignore: the mage.

And outsmarting mages is what Tane does best.

Flaw in All Magic