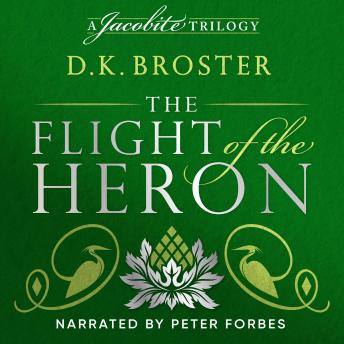 The Flight of the Heron

It is 1745 and the Jacobite rebellion is on the rise.
Ewen Cameron, a principled young Scottish Highlander, is destined and honoured to serve Bonnie Prince Charlie, the young Pretender, and to help the "rightful King" ascend to the British throne.
Major Keith Windham is a career soldier with the English Army - seemingly the antithesis of Ewen. He is jaded, worldly and loyal to the Crown but, ultimately, an outsider.
Their fates are linked inextricably when a highland prophecy tells Ewen that the flight of a heron will predict five meetings with an Englishman who will cause him much harm but also render a great service.
Ewen is sceptical, but the prophecy proves true when he meets Englishman Keith Windham - and a gripping tale of adventure, danger, and true and lasting friendship is set into motion.
Both are men who are willing to die for their honour and their beliefs. Each is on an opposing side. But who will emerge the victor?

With action, historical adventure and lyrical descriptions of the Scottish Highlands, The Flight of the Heron is sure to appeal to fans of Diana Gabaldon's Outlander series and Peter May's Lewis trilogy.

Flight of the Heron