Flight of the Nighthawks: Book One of the Darkwar Saga 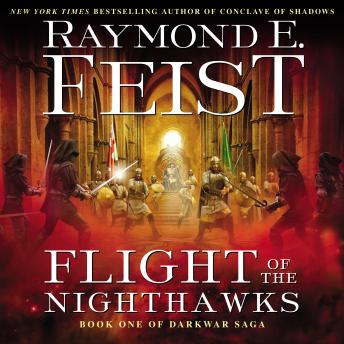 The New York Times bestselling author revisits his signature world of Midkemia in this first book in a new trilogy that ushers in the third, and most dramatic, Riftwar yet: the Darkwar

Flight of Nighthawks picks up two years after Exile’s Return as Pug, the powerful sorcerer, awakens from a nightmare that portends destruction for all of Midkemia. Disturbed by his dream, Pug calls for a convening of the Conclave of Shadows.

Meanwhile, in a small town on the other side of Midkemia, two young brothers are coming of age. As they travel away from home, towards apprenticeships and adulthood, the boys are attacked by bandits and mistakenly transported to Sorcerer’s Isle, the home of the Conclave of Shadows.

Though they are untrained and unready, the brothers will join the powerful, mysterious Conclave to confront Midkemia’s most looming evil yet—the Nighthawks, assassins feared throughout the centuries. And Pug will face his old nemesis, the evil wizard formerly known as Sidi, now Leso Varen, in a confrontation with everything at stake: his honor, his life, and the future of Midkemia.

Flight of the Nighthawks: Book One of the Darkwar Saga