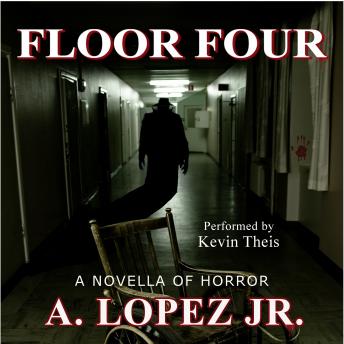 Floor Four: A Novella of Horror

Written By: A. Lopez Jr.

How curious would you be to sneak in to an old hospital, armed with only a flashlight, and seek answers to the rumors of the Mangler? 'A loud bang was heard from above, scaring the boys. They shined their lights up the stairwell. The sounds of chains rattling on the floor stirred the dust above. Something or Someone was up there. Doug, hiding his fear, took a couple of more steps up. Brandon and Kyle looked at him, their feet locked in place. They had no intention of going any further.'The old, abandoned Saint Vincent Hospital is said to be haunted by the ghost of David Henry Coleman, the notorious serial killer, known as The Mangler. Coleman died on the fourth floor after being shot by police. For the three Jr. High boys, their curiosity gets the best of them as they explore the old hospital, despite 'Old Man' Jake's warning. No one knew of Jake's dark connection to the killer and the hospital. And now, on the anniversary of The Mangler's death, a group of high school kids are planning a private party on the haunted fourth floor. Jake must keep everyone out and protect them from the true evil that lurks on Floor Four.How brave are you?

Floor Four: A Novella of Horror