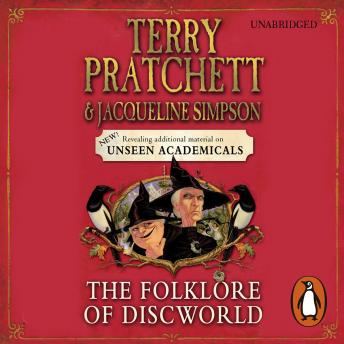 The Folklore of Discworld

Most of us grow up having always known to touch wood or cross our fingers, and what happens when a princess kisses a frog or a boy pulls a sword from a stone, yet sadly some of these things are now beginning to be forgotten. Legends, myths, fairytales: our world is made up of the stories we told ourselves about where we came from and how we got there. It is the same on Discworld, except that beings which on Earth are creatures of the imagination - like vampires, trolls, witches and, possibly, gods - are real, alive and in some cases kicking on the Disc.

In The Folklore of Discworld, Terry Pratchett teams up with leading British folklorist Jacqueline Simpson to take an irreverent yet illuminating look at the living myths and folklore that are reflected, celebrated and affectionately libelled in the uniquely imaginative universe of Discworld.

Bonus feature: includes a discussion on folklore between Terry Pratchett and Jacqueline Simpson.