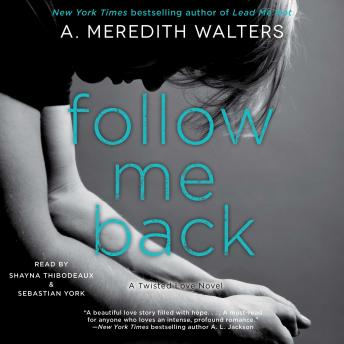 The sequel to Lead Me Not, this dangerously sexy second installment in the Twisted Love series continues Aubrey and Maxx’s love story, from New York Times bestselling author A. Meredith Walters—who “writes the most beautifully flawed characters that still have you swooning” (Sawyer Bennett, USA TODAY bestselling author of the Off series).

Aubrey Duncan has loved…and lost. Should she follow a heart that’s betrayed her or a head that tells her to let go?

Maxx Demelo’s addiction almost destroyed him. It ruined his life and, most importantly, his relationship with the only girl he ever loved.

He has vowed to become the man Aubrey Duncan deserves. Even if he has to tear himself apart to do it. So he enters rehab, trying to fix the parts of him that are shattered as he longs to be healthy and whole.

Aubrey lost everything because she chose to listen to her heart. Now she has sworn to put herself first, to heal in the only way that she can…far away from Maxx and his demons.

But just as Aubrey is starting over, Maxx is released from rehab and thrust back into her world, determined to prove how much they still need each other. And the chaos that had defined them threatens to unleash once again…

But a heart, no matter how broken, is impossible to ignore.