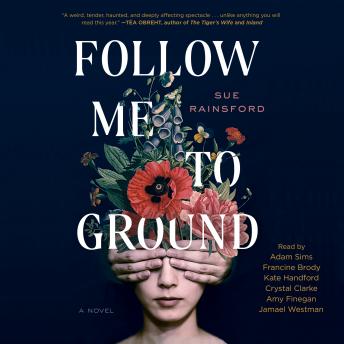 One of Literary Hub’s Favorite Books of the Year

“Seethingly assured…like all the best horror, [Follow Me to Ground] is an impressive balancing act between judicious withholding and unnerving reveals.” —The Guardian

A “legitimately frightening” (The New York Times Book Review) debut novel about an otherworldly young woman, her father, and her lover that culminates in a shocking moment of betrayal.

“You’ve never encountered a father-daughter story like Rainsford’s slim debut” (Entertainment Weekly). Ada and her father, touched by the power to heal illness, live on the edge of a village where they help sick locals—or “Cures”—by cracking open their damaged bodies or temporarily burying them in the reviving, dangerous Ground nearby. Ada, a being both more and less than human, is mostly uninterested in the Cures, until she meets a man named Samson—and they quickly strike up an affair. Soon, Ada is torn between her old way of life and new possibilities with her lover, and eventually she comes to a decision that will forever change Samson, the town, and the Ground itself.

“Visceral in its descriptions…this unworldly story is a well-crafted and eerie exploration of desire…beautifully intoxicating” (Shelf Awareness). In Ada, award-winning author Sue Rainsford has created an utterly bewitching heroine, one who challenges conventional ideas of womanhood and the secrets of the body. “A triumph of imagination and myth-bending…equal parts beauty and horror [Follow Me to Ground is] unlike anything you will read this year” (Téa Obreht).