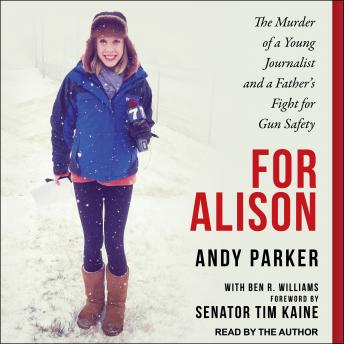 For Alison: The Murder of a Young Journalist and a Father's Fight for Gun Safety

On August 26, 2015, Emmy Award-winning twenty-four-year-old reporter Alison Parker was murdered on live television, along with her colleague, photojournalist Adam Ward. Their interviewee was also shot but survived.

In the wake of his daughter's murder, Andy Parker became a national advocate for commonsense gun safety legislation. The night of the murder, with his emotions still raw, he went on Fox News and vowed to do 'whatever it takes' to end gun violence in America. Today he is a media go-to each time a shooting rocks the national consciousness, and has worked with a range of other crusaders, like Congresswoman Gabby Giffords, Mayor Michael Bloomberg, and Lenny Pozner, whose son was killed at Sandy Hook Elementary School and brought suit against Alex Jones and Infowars, who claimed the shooting was staged. In For Alison, Parker shares his work as a powerhouse battling gun violence and gives a plan for commonsense gun legislation that all sides should agree on. He calls out the NRA-backed politicians blocking the legislation, shares his fight against 'truthers,' who claim Alison's murder was fabricated, and reveals what's ahead in his fight to do whatever it takes to stop gun violence.

Parker's story is one of great loss, but also resilience, determination, and a call to action.

For Alison: The Murder of a Young Journalist and a Father's Fight for Gun Safety