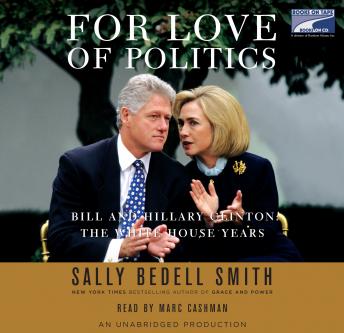 During their eight years in the White House, Bill and Hillary Clinton worked together more closely than the public ever knew. Their intertwined personal and professional lives had far-reaching consequences–for politics, domestic policy, and international affairs–and their marital troubles became a national soap opera. Based on unparalleled access to scores of Clinton insiders–cabinet officers, top administration officials, close personal friends–and skilled analysis of a vast written record, including previously unavailable private papers, For Love of Politics is the first book to explain the dynamics of Bill and Hillary’s relationship, showing that they are two halves of a unique whole and that it is impossible to understand one Clinton without factoring in the other.

Sally Bedell Smith, acclaimed author of Grace and Power: The Private World of the Kennedy White House, offers intimate scenes from the Clinton marriage, with new details and insights into how a passion for politics sustained Bill and Hillary through one crisis after another. With clarity and depth, Smith examines the origins of an unconventional copresidency, explains the impact of the Clintons’ tensions as well as their talents, and reveals how Hillary shifted from openly exercising power in the first two years to acting as a “hidden hand,” advising her husband on a range of foreign and domestic issues as well as decisions on hiring and firing.

Smith describes for the first time the inner workings of a White House with an unprecedented “three forces to be reckoned with”–Bill, Hillary, and Al Gore–and shows how the First Lady’s rivalry with the Vice President played out in the West Wing and even more profoundly during the 2000 campaign. As Hillary seeks to follow in her husband’s footsteps, this riveting book will leave readers marveling at what they never knew about Bill’s intensely covered presidency–and wondering what it would be like to have two presidents, both named Clinton, living in the White House.