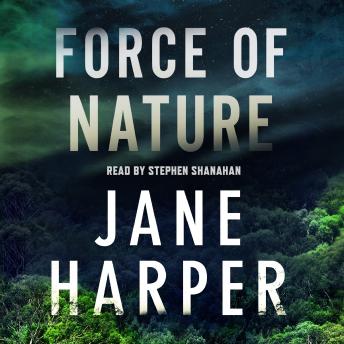 Force of Nature: A Novel

'Narrator Stephen Shanahan...makes it sizzle to the very end. Both story and narrator are not to be missed.' — AudioFile Magazine, Earphones Award winner

Five women go on a hike. Only four return. Force of Nature begs the question: How well do you really know the people you work with?

When five colleagues are forced to go on a corporate retreat in the wilderness, they reluctantly pick up their backpacks and start walking down the muddy path.

But one of the women doesn’t come out of the woods. And each of her companions tells a slightly different story about what happened.

Federal Police Agent Aaron Falk has a keen interest in the whereabouts of the missing hiker. In an investigation that takes him deep into isolated forest, Falk discovers secrets lurking in the mountains, and a tangled web of personal and professional friendship, suspicion, and betrayal among the hikers. But did that lead to murder?

Praise for Force of Nature:

'All the novel's characters have been drawn with exceptional complexity, and none more so than Aaron Falk...So much more than a conventional detective, the reflective and compassionate Falk provides the book's moral compass.' — New York Times Book Review

'Harper yet again delivers a very satisfying mystery from beginning to end, perfect to curl up with...Stephen Shanahan does an excellent narration with his calm, deep, Australian accented voice.' — BookRiot

“Force of Nature bristles with wit; it crackles with suspense; it radiates atmosphere. An astonishing book from an astonishing writer.” — A.J. Finn, author of The Woman in the Window

'Set against the fascinating backdrop of a wild, rural location in south Australia, Harper's sequel to her acclaimed Ned Kelly Award-winning debut, The Dry, presents an intriguing crime that might not actually exist and potential suspects with realistically complex and possible motives.' — Library Journal

Force of Nature: A Novel