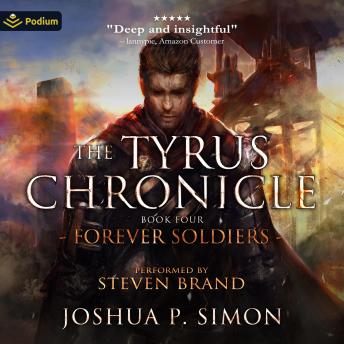 War defines his past. Living haunts his present. Peace mocks his future.

Months have passed since Tyrus ended a decade of war between Turine and Genesha by destroying the Geneshan's sorcerous artifact. He had hoped that taking his family south would grant him the peace he desired, but even in the Southern Kingdoms, war welcomes him instead.

Ava strikes a deal with the Southern Kingdom leaders to protect her brother, taking his place in their fight to protect their lands from invading forces. Having spent her adult life entrenched in battle, Ava doesn't hold any illusions as to what awaits her. A new land, a new language, and new obstacles reinforce what she already knows—nothing in life is easy. Her men, an entire nation, and, most of all, her family, depends on her success.

Without a call of war to answer, Tyrus leads his group of settlers to their new town, taking on the role of mayor with the skills he has honed for more than a decade—assess, prioritize, plan, execute. When memories of the past begin to cloud his judgement, he is forced into a new kind of war. One he doesn't know he can or wants to fight.

Once a solider, forever a soldier.

Forever Soldiers is the final book in the military fantasy series The Tyrus Chronicle.