The Forgotten 500: The Untold Story of the Men Who Risked All for the Greatest Rescue Mission of World War II 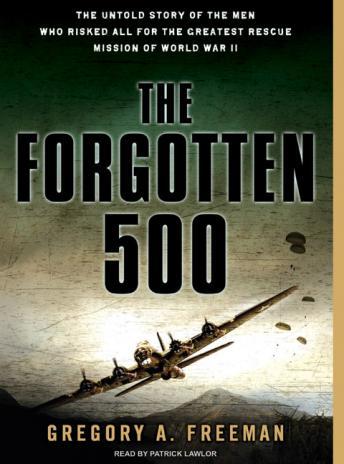 Written By: Gregory A. Freeman

The astonishing, never-before-told story of the greatest rescue mission of World War II-when the OSS set out to recover more than 500 airmen trapped behind enemy lines...

During a bombing campaign, hundreds of American airmen were shot down in Nazi-occupied Yugoslavia. Local Serbian villagers risked their own lives to give refuge to the soldiers, and for months the airmen lived in hiding, waiting for rescue.

In 1944, Operation Halyard was born. The risks were incredible. The starving Americans in Yugoslavia had to construct a landing strip-without tools, without alerting the Germans, and without endangering the villagers. And the rescue planes had to make it through enemy airspace and back-without getting shot down themselves.

Classified for over half a century for political reasons, the full account of this unforgettable story of loyalty, self-sacrifice, and bravery is now being told for the first time. The Forgotten 500 is the breathtaking, behind-the-scenes look at the greatest escape of World War II.

Forgotten 500: The Untold Story of the Men Who Risked All for the Greatest Rescue Mission of World War II

by Gregory A. Freeman

This title is due for release on October 8, 2007
We'll send you an email as soon as it is available!