Founding Faith: Providence, Politics, and the Birth of Religious Freedom in America 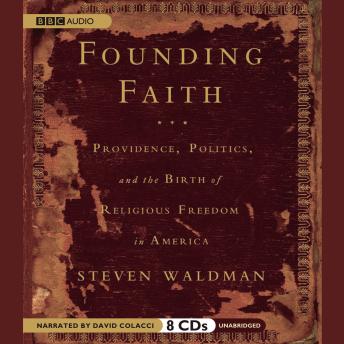 Theculture wars have distorted the dramatic story of how Americans came to worshipfreely. Many activists on the right maintain that the United States was foundedas a "Christian nation." Many on the left contend that the Founders were secularor deist and that the First Amendment was designed to boldly separate churchand state throughout the land. None of these claims are true, arguesBeliefnet.com editor in chief Steven Waldman.
Withrefreshing objectivity, Waldman narrates the real story of how our nation's foundersforged a new approach to religious liberty, a revolutionary formula thatpromoted faith-by leaving it alone. The spiritual custody battle over theFounding Fathers and the role of religion in America continues today. Waldmanprovocatively argues that neither side in the culture war has accuratelydepicted the true origins of the First Amendment. He sets the record straight,revealing the real history of religious freedom to be dramatic, unexpected,paradoxical, and inspiring.

Founding Faith: Providence, Politics, and the Birth of Religious Freedom in America