Founding Gardeners: The Revolutionary Generation, Nature, and the Shaping of the American Nation 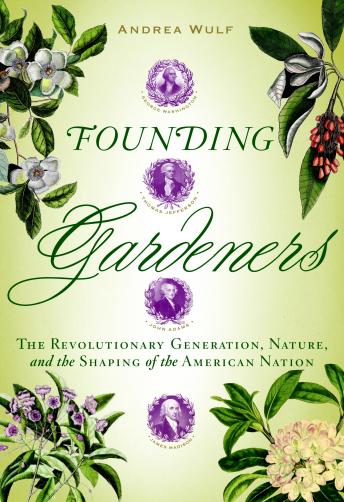 From the bestselling author of The Invention of Nature, a fascinating look at the Founding Fathers like none you've seen before.

“Illuminating and engrossing.... The reader relives the first decades of the Republic ... through the words of the statesmen themselves.” —The New York Times Book Review

For the Founding Fathers, gardening, agriculture, and botany were elemental passions: a conjoined interest as deeply ingrained in their characters as the battle for liberty and a belief in the greatness of their new nation.

Founding Gardeners is an exploration of that obsession, telling the story of the revolutionary generation from the unique perspective of their lives as gardeners, plant hobbyists, and farmers. Acclaimed historian Andrea Wulf describes how George Washington wrote letters to his estate manager even as British warships gathered off Staten Island; how a tour of English gardens renewed Thomas Jefferson’s and John Adams’s faith in their fledgling nation; and why James Madison is the forgotten father of environmentalism. Through these and other stories, Wulf reveals a fresh, nuanced portrait of the men who created our nation.

Founding Gardeners: The Revolutionary Generation, Nature, and the Shaping of the American Nation