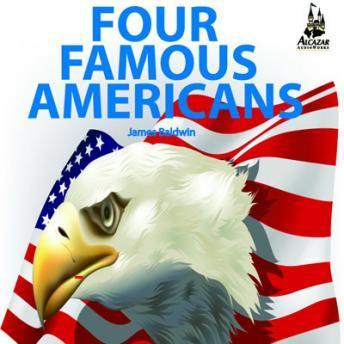 These stories help us get to know the gentleman as people and then take us through their great accomplishments that make us appreciate their place in American history.

Table of Contents:
The Story of George Washington
Chapter 01. When Washington was a Boy
Chapter 02. His Homes
Chapter 03. His Schools and Schoolmasters
Chapter 04. Going to Sea
Chapter 05. The Young Surveyor
Chapter 06. The Ohio Country
Chapter 07. A Change of Circumstances
Chapter 08. A Perilous Journey
Chapter 09. His First Battle
Chapter 10. The French and Indian War
Chapter 11. The Mutterings of the Storm
Chapter 12. The Beginning of the War
Chapter 13. Independence
Chapter 14. The First President
Chapter 15. ""First in the Hearts of His Countrymen""

The Story Of Abraham Lincoln
Chapter 01. The Kentucky Home
Chapter 02. Work and Sorrow
Chapter 03. The New Mother
Chapter 04. School and Books
Chapter 05. Life in the Backwoods
Chapter 06. The Boatman
Chapter 07. The First Years in Illinois
Chapter 08. The Black Hawk War
Chapter 09. In the Legislature
Chapter 10. Politics and Marriage
Chapter 11. Congressman and Lawyer
Chapter 12. The Question of Slavery
Chapter 13. Lincoln and Douglas
Chapter 14. President of The United States
Chapter 15. The End of a Great Life

AUTHOR
James Baldwin (1841 - 1925) was a pioneer of primary education, a teacher for many years and eventually an administrator and finally Editor-in-Chief of the American Book Company, specializing in educational text.

James Baldwin's lasting fame is for the children's literature he wrote, over 50 books, selling in the millions.

COMMENTARY
Reviews for Alcazar AudioWorks' production of Four Great Americans
Four Famous Americans is an audiobook by author James Baldwin, read by Bobbie Frohman and David Thorn, produced by Alcazar AudioWorks. The four Americans are Abraham Lincoln, Benjamin Franklin, Daniel Webster, and George Washington. Each CD is approximately an hour in length, bookmarked every 3 minutes for an easy return to the story after a break.

The story of Abraham Lincoln begins at the beginning, in Kentucky. His family was a pioneer family that lived off the land. Abe's childhood impacted the kind of man he was to become: determined, honest, and willing to speak his mind.

Each chapter focuses on a portion of Lincoln's life. As a young man, he spent time on a trading barge and visited New Orleans where he was introduced to the horrors of slavery. He returned home with the desire to change his life and the lives of others. It was then that he began studying to become a lawyer. Not long after that, he started running for various public office and, as we all know, he eventually won the Presidency.

Benjamin Franklin was a character his whole life. He was the youngest of sixteen children and, because he was the youngest, his father was able to send him to grammar school. There young Ben learned that he loved reading and writing, but not mathematics. Later in his life, Benjamin Franklin became a printer, newspaper entrepreneur, and advocate for the new nation, the United States. Without his diplomatic skills, the colonies would have had a more difficult time breaking away from England.

The third disk features Daniel Webster, from new Hampshire. The son of Revolutionary fighter and judge Ebenezer Webster, Daniel Webster was the ninth child of ten and the youngest boy in the family. Fortune had smiled on the family by the time Daniel was of school age, so his parents were able to send him to school. Daniel learned to read very young; in fact, neighbors came from far and wide to hear him read.

Eventually, Judge Webster decided to send Daniel to Exeter Academy. With much study, he soon became a good scholar and at the head of his class in spite of his classmates, who were gentlemen's sons and cruel to this boy from humble means. Often Daniel Webster cried from the treatment he received at the hands of these young men. Still, he excelled academically, first at Exeter Academy, then with a private tutor, and later at Dartmouth College where he became a great orator. During his lifetime, Webster served as a Congressman and a famous lawyer before he eventually retired to the country, where he continued speaking as a patriot and advocate for the peaceful prosperity he believed each American should have.

George Washington's life began in Virginia where bpth black and white slaves were common in Virginia and most items were homemade. Though his older, half brothers were well-educated at Appleby's in England, George was taught by Mr. Williams, a white slave owned by George's father because he had been too poor to pay for his passage to America. Mr. Washington had Mr. Williams educate his son in reading, writing, arithmetic, and land surveying.

This surveyor later, as everyone knows, served outstandingly in the army and then as the United State's first President, and his service didn't end when he retired from office; he continued to advise Congress on various issues because so many people admired him.

Every chapter holds some wonderful quote or anecdote about its famous American. Listening to these stories at home or in the car will give children many wonderful stories about these four famous Americans to share with friends and family.
Reviewed By: Kate O'Mara - EHO Eclectic Homeschool Online
"