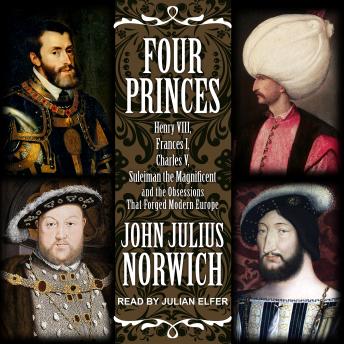 John Julius Norwich-who the Wall Street Journal called 'the very model of a popular historian'-has crafted a big, bold tapestry of the early sixteenth century, when Europe and the Middle East were overshadowed by a quartet of legendary rulers, all born within a ten-year period:

Francis I of France, the personification of the Renaissance, who became a highly influential patron of the arts and education

Henry VIII, who was not expected to inherit the throne but embraced the role with gusto, broke with the Roman Catholic Church and appointed himself head of the Church of England

Charles V, the most powerful and industrious man at the time, was unanimously elected Holy Roman Emperor

Suleiman the Magnificent stood apart as a Muslim, and brought the Ottoman Empire to its apogee of political, military, and economic power

Against the vibrant background of the Renaissance, these four men laid the foundations for modern Europe and the Middle East, as they collectively impacted the culture, religion, and politics of their respective domains.