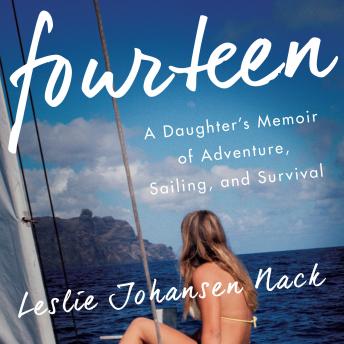 Fourteen: A Daughter's Memoir of Adventure, Sailing, and Survival

After her mother and father divorce at age seven, Leslie quickly learns the hard lessons of being Dad's favorite. The abuse begins at age nine and doesn't end until she begins to fight back, finally, at age fourteen. Her father, a larger-than-life Norwegian, assumed full custody of Leslie and her two sisters and moved the family from their 63-acre rustic ranch in Northern California to a 45-foot sailboat in Southern California. The family spent two years living aboard their boat preparing for the trip of their father's dreams: a trip around the world. On February 5, 1975, the family set sail for French Polynesia. Intense and inspiring, Fourteen is a coming-of-age adventure story about a young girl who comes into her own power, fights back against abuse, becomes an accomplished sailor, and falls in love with the ocean and the natural world. The outer voyage is a mirror of her inner journey, and her goal is to find the strength to endure in a dangerous world, and within a difficult family.

Fourteen: A Daughter's Memoir of Adventure, Sailing, and Survival

This title is due for release on November 4, 2016
We'll send you an email as soon as it is available!