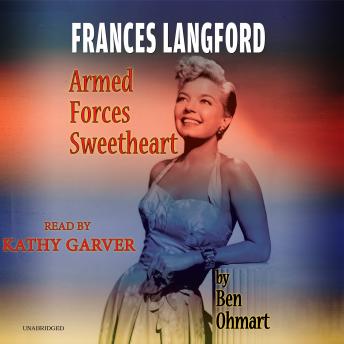 Everyone was “In the Mood for Love,” when Frances Langford, renowned Big Band singer with a rich contralto voice, rose from performing at hometown parties in Mulberry, Florida, to Broadway, Old Time Radio, and movies during Hollywood’s Golden Era. Her signature song carried her from turntables to troops in World War Two, and then into the stuff of legends.

Her beauty eclipsed her broadcasts, when the movies plucked her from speakers to screens. Her film debut in 1935 in Every Night at Eight led to Broadway Melody of 1936, in which she popularized “Broadway Rhythm” and “You Are My Lucky Star;” Born to Dance in 1936; and in 1942 in Yankee Doodle Dandy with James Cagney, in which she sang the rousing “Over There.”

For the first time, her personal interviews with author–publisher Ben Ohmart bring the treasured memories from her past to light. Return with her to the front lines from 1941 into the 1980s with Bob Hope and Jerry Colonna on USO tours through Europe, North Africa, and the South Pacific, entertaining thousands of GIs throughout the world.