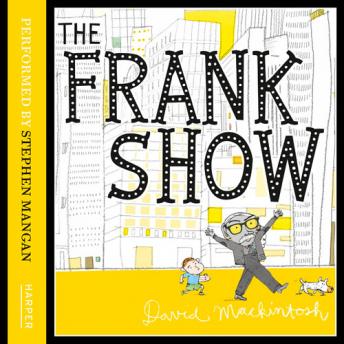 There’s more to Frank than meets the eye…


A quirky, witty and utterly brilliant picture book from the award-winning creator of Marshall Armstrong is New to our School, performed by Stephen Mangan.


Frank is your typical grandad, but no one has a grandad like him…


If you had to stand up and talk, for one whole minute, about a member of your family, who would you pick? Everyone else chooses really cool people, like Tom’s Uncle Marlon who plays drums in a band, or Hannah’s mum with her company car. But there’s nothing cool about grandad Frank… or is there?


In this hilarious, wise and heart-warming story, awesome new talent David Mackintosh shows with a supreme lightness of touch just how much the older generation has to teach us, and how much fun learning from them can be. Perfect for young boys and girls from 3+.


Stephen Mangan is best known for his role as Guy Secretan in Green Wing.

This title is due for release on May 3, 2012
We'll send you an email as soon as it is available!