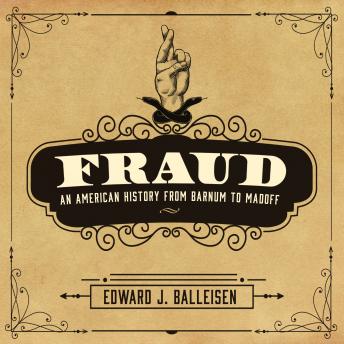 Fraud: An American History from Barnum to Madoff

The United States has always proved an inviting home for boosters, sharp dealers, and outright swindlers. Worship of entrepreneurial freedom has complicated the task of distinguishing aggressive salesmanship from unacceptable deceit, especially on the frontiers of innovation. At the same time, competitive pressures have often nudged respectable firms to embrace deception. As a result, fraud has been a key feature of American business since its beginnings. In this sweeping narrative, Edward Balleisen traces the history of fraud in America-and the evolving efforts to combat it-from the age of P. T. Barnum through the eras of Charles Ponzi and Bernie Madoff.

Starting with an early nineteenth-century American legal world of “buyer beware,” this unprecedented account describes the slow, piecemeal construction of modern regulatory institutions to protect consumers and investors, from the Gilded Age through the New Deal and the Great Society. It concludes with the more recent era of deregulation, which has brought with it a spate of costly frauds.

By tracing how Americans have struggled to foster a vibrant economy without enabling a corrosive level of fraud, this book reminds us that American capitalism rests on an uneasy foundation of social trust.