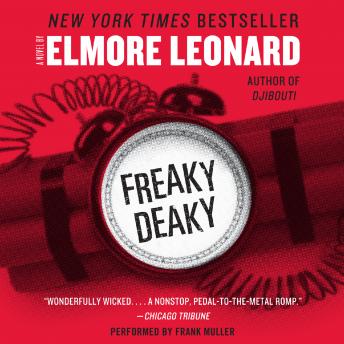 Over-the-hill former counter-culture SDS revolutionaries decide to turn bomb-making—and detonating—from a political statement to a profitable enterprise in the master Elmore Leonard’s electrifying and explosively funny thriller Freaky Deaky. The St. Louis Post-Dispatch calls Leonard, “the world’s greatest cops ‘n’ robbers novelist.” The Seattle Times says, “Leonard is more than just one of the all-time greats of crime fiction. He’s fast becoming an authentic American icon.” No matter where you wish to place the man who created the character of U.S. Marshal Raylan Givens, lately of TV’s hit series Justified, in the pantheon of mystery and noir detective fiction demigods—John D. MacDonald, Dashiell Hammett, James M. Cain and the like—there is no denying that nobody does it better than the Grand Master Elmore Leonard!