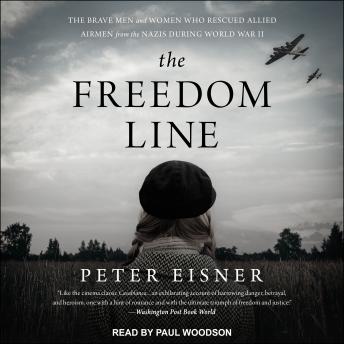 The Freedom Line: The Brave Men and Women Who Rescued Allied Airmen from the Nazis During World War II

As war raged against Hitler's Germany, an increasing number of Allied fliers were shot down on missions against Nazi targets in occupied Europe. Many fliers parachuted safely behind enemy lines only to find themselves stranded and hunted down by the Gestapo.

The Freedom Line traces the thrilling and true story of Robert Grimes, a twenty-year-old American B-17 pilot whose plane was shot down over Belgium on October 20, 1943. Wounded, disoriented, and scared, he was rescued by operatives of the Comet Line, a group of tenacious young women and men from Belgium, France, and Spain who joined forces to recover Allied aircrews and take them to safety. Brought back to health with their help, Grimes was pursued by bloodhounds, the Luftwaffe security police, and the Gestapo. And on Christmas Eve 1943, he and a group of fellow Americans faced unexpected danger and tragedy on the border between France and Spain.

The road to safety was a treacherous journey by train, by bicycle, and on foot that stretched hundreds of miles across occupied France to the Pyrenees Mountains at the Spanish border. Armed with guile and spirit, the selfless civilian fighters of the Comet Line had risked their lives to create this underground railroad, and by this time in the war, they had saved hundreds of Americans, British, Australians, and other Allied airmen.

Freedom Line: The Brave Men and Women Who Rescued Allied Airmen from the Nazis During World War II