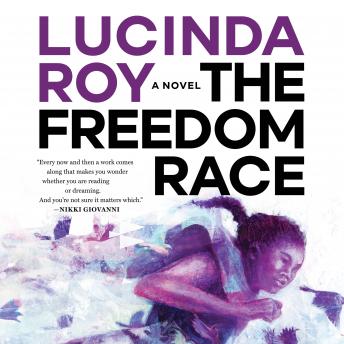 The Freedom Race, Lucinda Roy’s explosive first foray into speculative fiction, is a poignant blend of subjugation, resistance, and hope.

The second Civil War, the Sequel, came and went in the United States leaving radiation, sickness, and fractures too deep to mend. One faction, the Homestead Territories, dealt with the devastation by recruiting immigrants from Africa and beginning a new slave trade while the other two factions stood by and watched.

Ji-ji Lottermule was bred and raised in captivity on one of the plantations in the Homestead Territories of the Disunited States to serve and breed more “muleseeds.' There is only one way out—the annual Freedom Race. First prize, freedom.

An underground movement has plans to free Ji-ji, who unknowingly holds the key to breaking the grip of the Territories. However, before she can begin to free them all, Ji-ji must unravel the very real voices of the dead.

Written by one of today’s most committed activists, Lucinda Roy has created a terrifying glimpse of what might be and tempered it with strength and hope. It is a call to justice in the face of an unsettling future.