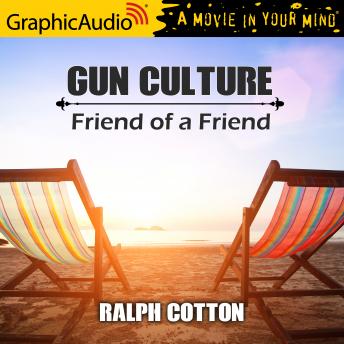 Friend of a Friend [Dramatized Adaptation]

Old ways and new clash in head-on confrontation: When journeyman hit man Ray Dylan agrees to look in on Sami Bloom, former mistress of a deceased Canadian crime financier, he realizes he must keep his profession a secret. What he doesn't realize is how difficult that is now that he has fallen for this warm-hearted beauty. While he struggles with the idea of confiding to her about his secret past, Dylan learns that Sami Bloom has some secrets of her own—and her secrets reach into the upper echelons of the very organization he works for. Add to that a greedy young criminal, who along with his thug-like bodyguard, poses a threat to Sami's life, and secrets or no secrets, Dylan knows it's time for bullets to fly.

In Friend Of A Friend, Cotton paints a stark unapologetic portrait of modern American crime, both at its ruthless struggling-for-power street level, and at its more discreet, tight-lipped, yet equally deadly seats of authority. Cotton has a unique way of weaving the reader's senses into the story. Known for fast-paced narrative and wry dark humor, Cotton takes inspiration for his stories from TV news and headlines. He creates a raw and colorful, almost desperate atmosphere around modern American culture, yet at some point, unexpectedly, leaves the reader with cause for hope.