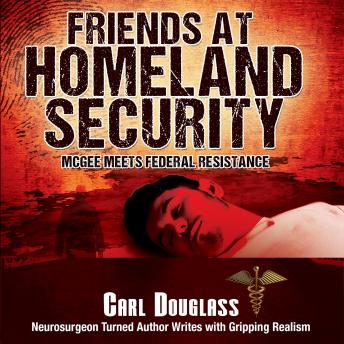 Friends at Homeland Security is the first in the six novella McGee series by Carl Douglass. McGee is a pre-eminent private investigator whose clients include the rich, famous, infamous, the important, and the unfortunate. Decklin Marcus, scion of the very wealthy investment banker, Howard Everhart Marcus, and mother Anne—residents of exclusive Gramercy Park, New York—is found dead in his rather seedy apartment; and no one seems to know how, why, or perhaps by whom. The investigation comes to involve all of McGee's considerable resources, NYPD detectives, senior CIA agents, DNI scientists, hostile Homeland Security agents, national and international databases, a Byelorussian hit man, and eventually the Russian mafia. There is something unusual about Decklin's corpse, something not copacetic at the bank, something suspicious about the parents, and something weird about Homeland Security's involvement in the whole thing. It is McGee's job to unravel the mystery, brave the tigers in their dens, to mollify all of the agencies, to protect his clients and his associates, and finally to achieve a denouement—a stunning surprise. He does it all with style and consummate intelligence.