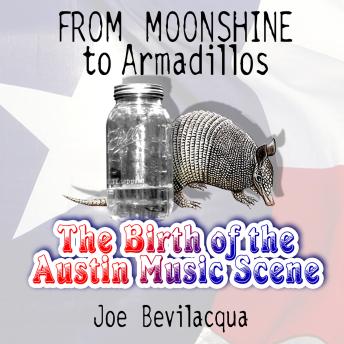 From Moonshine to Armadillos: The Birth of the Austin Music Scene

Veteran award-winning producer Joe Bevilacqua hosts this hour-long program outlining the history of Threadgill's and Armadillo World Headquarters, their contribution to the birth of the Austin music scene, and their influence on the Nashville sound and country rock.
"This program offers a soup to nuts history ofAustin's growth into the live music Mecca that it's become today. The show ismore than just contemporary talking heads and music-it features an amazingcollection of archival interviews and recordings (including tape of somenever-before-heard early Janis Joplin performances, which should qualify as anauthentic archival treasure). The production is well put-together, flowingsmoothly between many different elements."-Eric Nuzum, NPR's vice president of programming

From Moonshine to Armadillos: The Birth of the Austin Music Scene