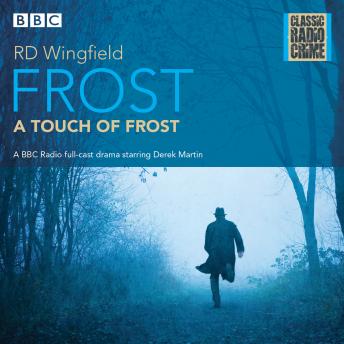 Jack Frost is disheveled, disorganised and disrespectful. His superiors don't like him. He has a habit of doing things his way – and getting results. But when Denton CID is faced with a spate of major crimes, Frost finds himself under pressure.

A young woman becomes the sixth victim of a multiple rapist, a teenage girl goes missing, there's a robbery at the Purple Parrot nightclub, and an old man is injured in a hit-and-run. With all this on his plate, Frost has little time and less patience for paperwork – but if he doesn't submit the overtime reports, there will be hell to pay. Has Frost bitten off more than he can chew?

A Touch of Frost gave rise to a hugely successful TV series that ran between 1992 and 2010. This gritty drama, first broadcast on Radio 4 in 1982, features Derek Martin as Jack Frost, with a supporting cast including Haydn Wood, Stephen Thorne and Alan Dudley.