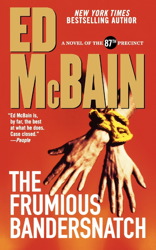 The kidnapping was audacious,
and there were plenty of witnesses...
But no one attending the dazzling launch party for up-and-coming pop idol Tamar Valparaiso knew what they were seeing when, halfway through her performance, masked men whisked the sexy young singer off a luxury yacht and into a waiting speedboat. Now, the evening that was supposed to send Tamar's debut album, Bandersnatch, skyrocketing with a million-dollar promotional campaign has instead kicked off a terrifying countdown for Steve Carella and the detectives of the 87th Precinct. Time is their enemy in the race to find Tamar's abductors -- before the rising star is extinguished forever.