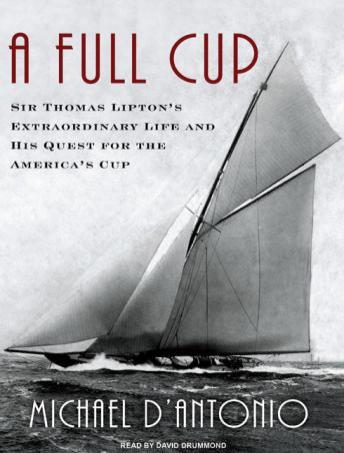 A Full Cup: Sir Thomas Lipton's Extraordinary Life and His Quest for the America's Cup

Today Lipton means tea. However, in his time Sir Thomas Lipton was known for much more. Raised in desperate poverty, he became rich beyond his wildest dreams. he built a global empire of markets, factories, plantations, and stockyards. And his colorful pursuit of the America's Cup trophy made him a beloved figure on both sides of the Atlantic.

In A Full Cup, Michael D'Antonio tells the tale of this larger-than-life figure. Beginning with a journey across the United States just after the Civil War, Thomas J. Lipton developed the ambition and learned the business techniques that helped him create the first chain of grocery stores. Wealthy before age thirty, he set his sights on the tea trade, and soon his name became synonymous with the product. Lipton's great business success makes for a compelling story of innovation and achievement. Moreover, though, Lipton's most intriguing creation was a public persona-one of the first formed with the help of a modern mass media-that appealed to millions of ordinary people, as well as the elites in America and Europe. Concocting simple stunts like elephant parades, Lipton mastered the new art of obtaining free publicity. With shameless self-promotion, he became one of the world's most eligible bachelors and a patron of the poor, and he ultimately reached legendary heights when he revived the competition for the America's Cup. With one losing attempt after another, the gallant Lipton, who didn't even know how to sail his own yacht, became ever more popular. D'Antonio's biography brings to vivid life this remarkable figure.