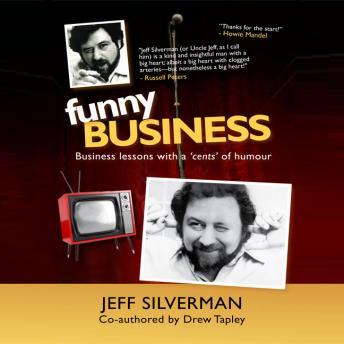 For the last twenty-five years, Jeff Silverman has been the President of Yuk

With a career spanning more than forty years, Jeff has helped launch

the careers of Jim Carey, Howie Mandel and Russell Peters, and started

his business career with the 99-cent Roxy Theatre back in the '70s,

showcasing cult underground movie marathons. He went on to run the

bands like The Police and The Ramones for the very first time.

In the '80s, Jeff turned his attention to television production, and

produced one of the first all-night television shows, The All-Night Show,

which was a fusion of zany experimental

interactive programming never seen on the air before, or since.

In this audio book, Jeff takes you behind the scenes of how a funny business

operates, and explains how the hilarious and insightful ventures and

adventures of his unconventional

career path have sprung forth a well

of invaluable skills along the way.'

This title is due for release on January 23, 2012
We'll send you an email as soon as it is available!