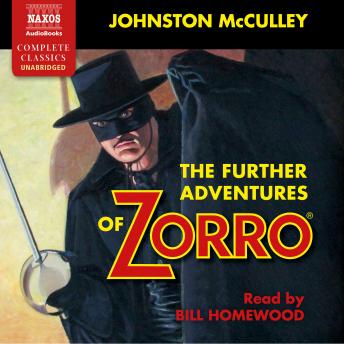 The Further Adventures of Zorro

The swashbuckling sequel to The Mark of Zorro (The Curse of Capistrano), The Further Adventures of Zorro sees the daring hero out for revenge once more. After Captain Ramon kidnaps the beautiful Lolita Pulido, Zorro takes to the seas and battles pirates in a bid to win her back. Swordfights, death traps and disastrously tight corners await him. But it is never much more than a challenge as the gallant caballero laughs in the face of danger - nothing can faze him. Villainous villains, heroic heroes and damsels in distress are all brought to life in full sonic splendour.